The true Story behind Natural Four by Chris James 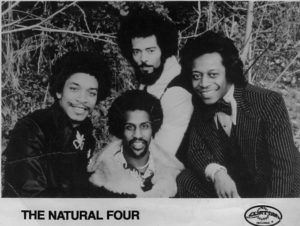 Formed in 1967, the Natural Four approached Fred Ivey about becoming their manager. Ivey owned a local record store called Tape Town and eventually made a deal with a local Oakland label, Boola Boola Records. Their first release, “I Thought You Were Mine” sold 30,000 copies locally, after being regularly played on San Francisco soul/R&B radio station KSOL and on Oakland’s KDIA where it rose to #7 on the chart.

ABC Records saw the group’s potential and picked them up. Their second release on Boola Boola, “Why Should We Stop Now” was re-released and, ABC then released “The Same Thing in Mind”, a remake of their first hit “I Thought You Were Mine”, and a cover of The Temptations’ “Message From a Black Man”, but none repeated the success of their initial recording.

Chess Records released the single, “Give a Little Love” in 1971 without success and, following this, Chris James replaced the rest of the band. The new group, with Delmos Whitley generally taking lead, signed with Curtis Mayfield’s label, Curtom Records, in 1972 and proceeded to release a string of US R&B hits, including one Top 40 breakthrough, 1973’s “Can This Be Real”. Their three Curtom LPs were mainly produced by Leroy Hutson, formerly of The Impressions, but after their third album failed to chart, the group called it quits.

Hear the true Story behind the group from Chris James himself for the first time and exclusiv!

A Conversation with Otis Williams from The Temptations

SoulDisco Exclusive: Interview with Kenny James from The Hues Corporation

SoulDisco Exclusive: Interview with Valerie Holiday from the Three Degrees talks about “In Bloom”